Lukasz Plawecki – World Champion in kickboxing, Polish Champion, winner of World Cup in kickboxing, trainer and owner HALNY Nowy Sacz club. Martial arts enthusiast who is doing what he likes. His hobby is a passion which every day is giving him new challenges and that cause he is over and over developing himself.

HOW DID IT ALL START ?

He has started his training in 2003 in Kick-Boxer Nowy Sącz Club under the watchful eye of his trainer Andrew/Andrzej Sliwa. One year later, thanks to determination and regular trainings, he was fighting for the first time, then in December 2004 he got runner-up in polish kickboxing championship.

In years 2004-2014 he fought amateur and professional fights and for 8 years was a member of National Team. When he was a junior (17-18 years old) he fought on competitions with seniors, because of at that time there were not already any section based on an age categories.

Since 2007 he is, like he used to say,  his own “trainer coordinator”, that’s mean that he is directing his own career and background by himself but he also based on experts leads from different kind of branches.

From 2015 he is working with doctor Lukasz Tota – physiologist from AWF in Cracow, who is helping him to lay down a training plan.

In the same year he has also started working with Martin Belak from Slovakia, who is his technical trainer and he is always present in the Lukas’s corner. In Banská Bystrica, city in Slovakia located 400 kilometers away from Nowy Sacz, he is carry on his own club where Lukasz Plawecki is training. That means he has drive 800 kilometers (more than 8 hours) to do one, hour and half training.

Through all years of his career he was taking advices from dieticians and other professional background experts. Knowledge and experience taking from people he met and courses he is taking let him developing himself as fighter and trainer. 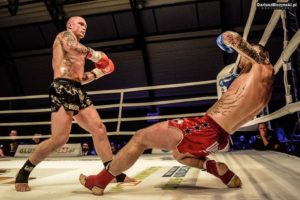 23rd of December 2017 he got his second title of World Champion IPCC organization which is the biggest in Asia and where is taking place most kickboxing events (among others: Kunlun Fight or Top King). Lukasz’s opponent was Yankuba Juwara – fighter from Gambia about height 194 centimeters. Fight ended by technical knockout – Yankuba was knocked down 3 times in the third round.

4th of November 2017 Lukasz Plawecki during fight of the night on Celtic Gladiator defeated in 5-rounds fight his opponent from Slovakia – Tomas Drabik. Every round belong to Lukasz but seal the winning was knockdown in last round.

Title of Celtic Gladiator Champion since then belong to Lukasz.

12th of December 2017 during MFC (Makowski Fighting Championship) famous “Boom Boom” knockdown in first round (in concept 5 rounds fight) his opponent from Moldova in about 43 seconds. The judge was forced to stop the fight because of total domination and second counting his opponent. After that Lukasz Plawecki become owner of next belt in his career

In 2017 Lukasz Plawecki has become an owner of tree belts during three months and he did it first time in whole history of polish kickboxing.

25th of May 2018 during FEN 21 in Wroclaw Lukasz Plawecki won 5-rounds fight for the FEN Champion belt in category -77 kilograms. Him opponent was Wojciech Wierzbicki –  latest owner of the belt.

OVER A DOZEN YEARS OF PROFESSIONAL CAREER

He have been fighting, among others, in countries like: China, Brazil, USA, France, Finland, Spain, Germany, Slovakia, Latvia, Moldova, Serbia and many other. Until now he have been fighting for the biggest organizations on the world like: GLORY, Kunlun Fight, KOK.

He is carrying on young fighter which are now Polish Champions and he is owner of DAN – black belt in kickboxing.

Prized twice by Ministry for Sports and Recreation in years 2014 and 2015 and also by Voivode Małopolskie Voivodeship price “Małopolski Laur Sportu” for training achievements.

He participated in many sports seminars among other with legend of Muay Thai – Rob Kaman, he was training with Ernesto Hoost in Netherlands and in Muay Thai Academy in Bangkok (Thailand).

He is taking active part in the biggest kickboxing events to increase his knowledge and experience.

Lukasz Plawecki is inviting to leading many sports seminars where he is sharing with his kickboxing skills.